“[Prumsodun] Ok, a Long Beach, California, native whose parents were Cambodian refugees, not only restages traditional works of Khmer classical dance but also uses the stories and vocabulary of the ancient style to create new works that center LGBTQ+ characters and perspectives. In the process, he’s helped to revitalize and bring global attention to an art form that was nearly wiped out with the vast majority of its practitioners in the Khmer Rouge genocide of the late 1970s.” – Dance Magazine 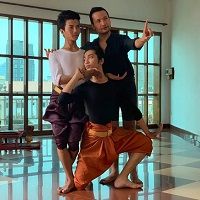