In 1980, Kylián traveled to the Northern Territory to see the largest-ever gathering of Australian Aboriginal tribes; they all spoke different languages, so they communicated with dance. The experience led Kylián to choreograph The Stamping Ground in 1983, and it’s been performed in many countries since. But never in Australia until now, as Bangarra Dance Theatre, the country’s leading Aboriginal company, takes the piece on. – The Sydney Morning Herald 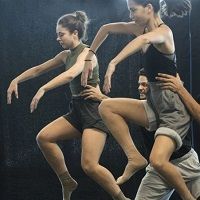