“Around 100 Hong Kong arts organisations, including commercial galleries, signed up to call a strike on Wednesday as lawmakers were expected to begin a series of votes on the [law which would make it easier to extradite Hong Kong citizens to mainland China on political charges]. Those proceedings have been postponed as protesters and the police clash outside the legislature.” – South China Morning Post (Hong Kong) 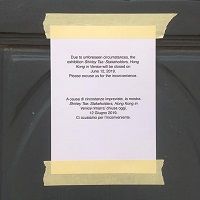