“Sarli became an instant sex symbol in her feature film debut, in El Trueno Entre las Hojas (Thunder Among the Leaves) in 1958, when she became the first woman to appear fully nude in a mainstream Argentine movie” – and during Argentina’s military dictatorship, her movies were censored, one not being shown until the return of democracy. – The New York Times 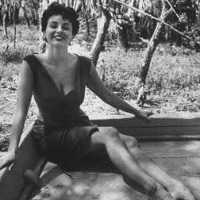