“At various points in the last three decades, [Tyree Guyton’s] Heidelberg Project, as it has come to be known, has been dismissed by neighbors as the junk of a crazy hoarder and hailed by critics as one of the great American artworks of the last 50 years. … After years of fighting off destruction from vandals, from elected officials, from arsonists and police, Guyton must now effectively destroy his work in order to save it.” – The New York Times Magazine 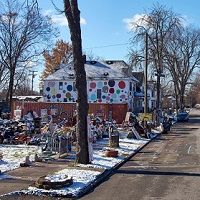