The ancient country, known as Doggerland, which could once have had great plains with rich soils, formed an important land bridge between Britain and northern Europe. It was long believed to have been hit by catastrophic flooding. Using seabed mapping data the team plans to produce a 3D chart revealing the rivers, lakes, hills and coastlines of the country. Specialist survey ships will take core sediment samples from selected areas to extract millions of fragments of DNA from the buried plants and animals. – The Guardian 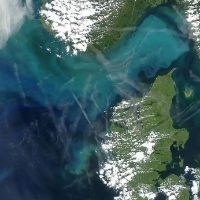