“So far the assaults have mostly been rhetorical rather than real. Universities and the press have fared somewhat worse. But straws in the wind include the rewriting of the narrative at the new Holocaust Museum in Budapest by Viktor Orban’s Fidesz government; and a similar intervention by Poland’s Law and Justice Party government at the new Museum of the Second World War in Gdansk, whose director, Pawel Machcewicz, was dismissed when he sought to resist government intervention.” – The Art Newspaper 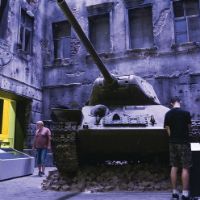