“Mawjoudin Queer Film Festival, in its second year, differs significantly from other film festivals: some participants wear badges that read ‘No Photos’; attendees were invited through a private Facebook page and were told not to geo-tag locations on social media; venues were revealed only in the final days before the festival.” – The New York Times 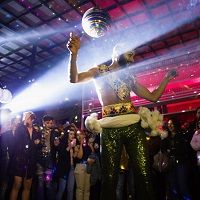