“[The handover] will end a decade-long struggle to retrieve the missing Brod papers which, according to Israel’s National Library, were stolen 10 years ago in Tel Aviv. The documents, letters and memoirs re-emerged in 2013, when two Israelis approached the German Literary Archives in Marbach, and private collectors, with a huge collection of unpublished documents belonging to Brod.” – Yahoo! (AFP) 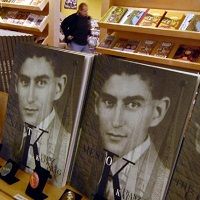