“On Tuesday (21st May), Waterstones Piccadilly sparked excitement online when it tweeted out a prominent sign, said to be spotted in London’s Leicester Square, which appeared to hint at news on the novel, titled The Mirror and the Light.” The sign has since disappeared from the billboard, and HarperCollins has no comment. – The Bookseller (UK) 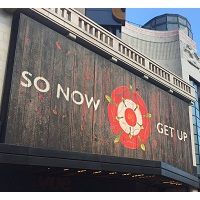