“Known for his incisive, off-kilter and sometimes controversial approach to joking about race, family and relationships, Chappelle has influenced a generation of younger comedians since becoming a national sensation with Chappelle’s Show, his early 2000s sketch comedy series on Comedy Central. His subsequent sudden retreat from the public eye added a layer of mystique, but Chappelle has been actively performing stand-up since 2013 and has since won two Grammys and two Emmys.” – The Washington Post 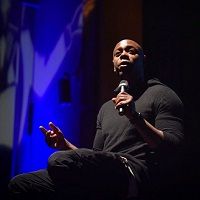