The project was commissioned by conservationist Richard Leakey, whose fossil discoveries have helped reveal how humankind has evolved. “The museum — titled ‘ngaren’ — will be the first center of its kind to present research, discovery, and exploration of more than two million years of human history and the origins of our universe from evolution, biodiversity, and overpopulation, to war, disease, and climate change.” – DesignBoom 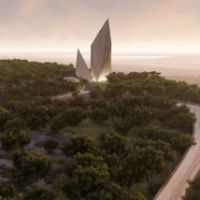