Hart’s creative journey began in – and probably before – kindergarten. Then, “encouraged by her parents and refusing to be confined by the contours in coloring books, she made the walls of her family’s home in Queens her canvas. She drew cartoons and other scenes on them, delighting her siblings and even her parents. By the time she was 8, her father was already introducing her as a professional artist — the very thing she would remain until her death on April 26 at 58.” – The New York Times 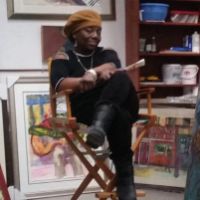