Just as the lights were going down at the State Theatre in Melbourne for the start of Opera Australia’s Rigoletto, George Dreyfus stood up and started yelling through a megaphone about the fact that the company had never produced the opera it had commissioned from him in 1969 and he turned in the following year. He went on for more than ten minutes at which point the police arrived. – Limelight (Australia) 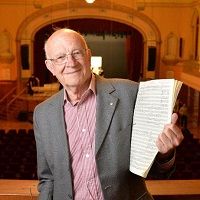