“Laboulaye’s creative work has been eclipsed by his political career” — a judge during France’s Second Empire, he was committed to women’s rights and the end of slavery — “but in his day he was recognized as a writer of fiction, too, and especially known for his fairy tales … [in which] rulers are more often than not oppressors, and women and outcasts and peasants usually win out.” – The New York Review of Books 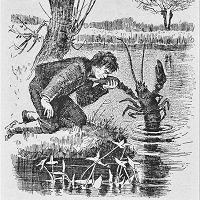