This “masculinist logic” infected the classroom. Criticism had always been central to the Workshop experience, and it was harsh by design. Engle believed “that young writers overestimated their creative powers, a flaw that only astringent criticism could overcome.” Cisneros put it more simply: “There was no love.” The poet Robert Bly described how “the aggression went against each other,” as students tore apart works in progress. Praise was uneven, and favoritism was everywhere.  – The New Republic 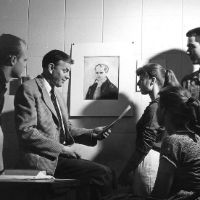