“The building’s most prominent feature will be a helical roof that connects to the ground via a spectacular open-air spiral staircase. Snøhetta has designed this to resemble an unfolding fan, evoking ‘the dynamism of dance and the human body’. The building is reminiscent of the Oslo Opera House completed by the firm in 2008, which also featured a publicly accessible roof that slopes down to meet the waterfront.” – Dezeen 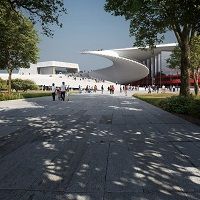