“She could get a laugh on literally every line you gave her,” remembered Raymond‘s creator. “I’ve never seen anything like it.” She received three Emmy nominations for her work on that series and two others for her performance as Georgette, the sweet-but-dim girlfriend of anchorman Ted Baxter, on MTM; she had an extensive stage career as well. – The New York Times 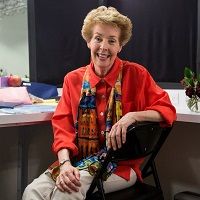