“Music was really profitable for convents: it brought in money from the community, donating to hear mass on their behalf, while a great musical reputation brought in girls of higher status and wealth.” Cloistered life meant choirs sang together for many years, and while only aristocrats could hear the chapel choirs of royals and nobles, while anyone could listen to convent services — so the best nuns’ choirs became genuine tourist attractions. – Bachtrack 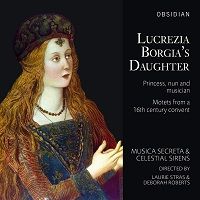