Arthur Brand, a/k/a “the Indiana Jones of the art world,” has recovered Buste de femme (Dora Maar), a 1938 painting which was stolen from a Saudi sheikh’s yacht on the French Riviera in 1999. After Brand had spent four years following leads on the painting’s whereabouts through the Dutch criminal underworld, a pair of intermediaries brought the canvas to his Amsterdam home. – Yahoo! (AFP) 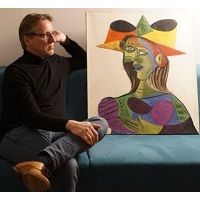