“In the early 1920s, a secret file scandalized white women reformers in the United States. It was known as the Secret Dance File, its contents too shocking (and titillating) to print or even send in the mail. … The file contained frank descriptions of Pueblo dances that depicted and parodied sexual acts … [and] it made a case for banning [those] ceremonial dances on the grounds that they were immoral and performed only for pleasure.” – JSTOR Daily 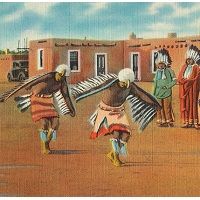