The Eastern State Penitentiary in Philadelphia, built in 1829, gets hundreds of thousands of visitors each year. “Talking about the site’s history didn’t seem like enough for Sean Kelley, senior vice president and director of interpretation. Two years ago, … [he] helped rewrite the museum’s mission statement, declaring that Eastern State would no longer be neutral in recognizing mass incarceration as a crisis.” Shannon Eblen has a look at the new exhibits that have gone up in response to that change. – The New York Times 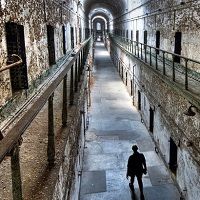