By the time of her early death, she had been the subject of many dark rumors, most of which she had initiated. But Landon was one of the first modern poets, who “explored the art of performative self-creation in the commercial press—an art fated to become a habit in the social-media age—and she was one of the first to pay its costs. Neither sincere in a 19th-century sense nor confessional in a 20th-century one, L.E.L.’s signature style was a curiously opaque self-obsession.” – The Atlantic 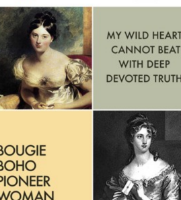