The scheme is slated to cost nearly £300 million and is London’s volley in an intercontinental game of high culture one-upmanship, which in recent years has produced Herzog & de Meuron’s Elbphilharmonie in Hamburg and Jean Nouvel’s Philharmonie in Paris. This arms race for cultural dominion has, in London however, reached new levels of absurdity with the decision to build the new 2,000 seat concert hall less than 300 metres from an existing 2,000 seat concert hall. – dezeen 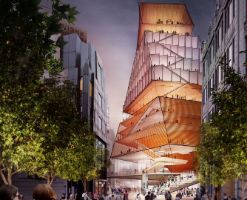