The American Museum of Natural History in New York has a 1939 diorama purporting to show a diplomatic meeting between governor Peter Stuyvesant of New Amsterdam (today’s Manhattan) and some Lenape Indians, and — not everything in it is wrong (Stuyvesant really did have a pegleg), but in 2019, you can’t call it accurate. So the Museum decided to make the diorama an exhibit on old stereotypes, with labeling explaining the differences between what’s shown and what’s known of the site’s actual history. Reporter Ana Fota has a look. – The New York Times 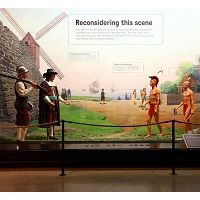