“She was perhaps the best known and most prolific advocate for classical music the Twin Cities has ever known. … She wrote erudite and witty program notes for the Minnesota Orchestra for 33 years while serving as the orchestra’s principal speaker, which meant giving 60 speeches a year, some of them on radio and television but most of them in the form of pre-concert talks at Orchestra Hall, a format she pioneered.” – MinnPost (Minneapolis) 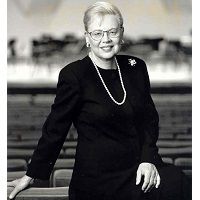