In All In A Row by Alex Oates, “a puppet portrays the character of Laurence, who is described as ‘autistic, non-verbal and occasionally violent’. … The play has faced a backlash online since a production video previewing it was released.” Critics say that the casting “fed into ‘a negative narrative of dehumanising’. A spokesman for the play said it was ‘untenable’ to get autistic performers to play the part.” – London Evening Standard 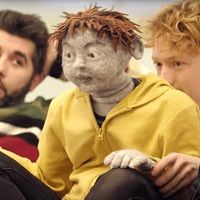