Carolina Miranda: “Before California was West, it was North and it was East: the uppermost periphery of the Mexican Empire, and the arrival point for Chinese immigrants making the perilous journey from Guangdong. It was part of different maps that co-exist, one on top of the other: layers of visions and lesser-known narratives, that are ongoing and still unfolding.” – Guernica 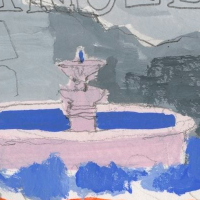