Ek Ladki Ko Dekha Toh Aisa Laga (roughly, “I felt something when I saw that girl”) isn’t the first-ever lesbian movie from India — Deepa Mehta’s indie film Fire came out in 1996 (and extremists burned down a few theatres that showed it) — but it’s the first to come from the big Bollywood studio system, and its cast features some of India’s biggest stars. Sharan Dhaliwal writes about seeing the film with other Indian queer folks. — The Guardian 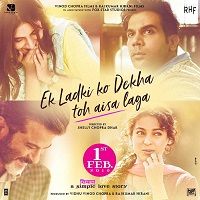