“Born of infinite resources and expectations and hubris, the project’s formal artistic failure as cinema was as dialectically preordained as was the failed realization of the Soviet Communist utopia. Yet the Soviet-style command economy mobilization of resources needed to forge the institute in Kharkiv and the art installations in Paris succeeded.” – Tablet 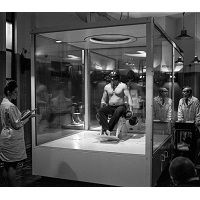