“The musical Notre Dame de Paris” — aka “The Hunchback of Notre Dame” — has been a hit around the world since it opened in France in 1998. But, in London two years later, the critics savaged the English-language version. Now, a producer is taking the bold step of bringing it back to London — but in the original French. The secret, he says, is in the surtitles.” — BBC 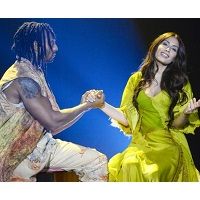