Given the scope of the looting, the task ahead remains mountainous. In Berlin, for example, at the Central and Regional Library, almost a third of the 3.5 million books are suspected to have been looted by the Nazis, according to Sebastian Finsterwalder, a provenance researcher there. “Most major German libraries have books stolen by the Nazis,” he said. – The New York Times 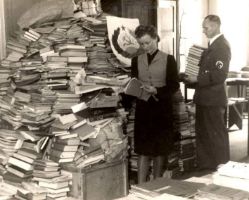