Last month, Thelma Fardin posted a video to Instagram in which she tearfully recounted how Juan Darthés allegedly raped her while they were touring Nicaragua for a telenovela. She was 16; he was 45. Fardin’s million followers sent the video viral, with the hashtag #Miracomonosponemos (roughly, “#LookWhatYouveDoneToUs”), and the effect has been as big as that of the Harvey Weinstein accusations in the US. — Public Radio International 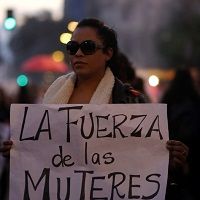