“Since April 2017, an estimated one million of Xinjiang’s 11 million Uyghur population” — including most of its Uyghur artists and writers — “have disappeared into what the government calls ‘re-education’ camps, without recourse or documentation, where they are reportedly tortured into denouncing Islam and their Uyghur identity, and accepting Communist Party rule and Han Chinese dominance.” — The Art Newspaper 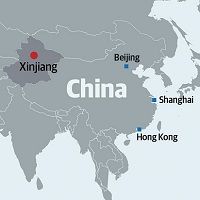