A widespread belief of the 15th century held that the bite of a tarantula could only be treated by wild, mad dancing; groups of people would be possessed by a compulsion to dance, and towns would pay musicians to play for the sufferers. (Hence the dance called the tarantella.) “In fact, mass epidemics of dancing have afflicted various parts of Europe since the seventh century, breaking out particularly in times of famine, disease, and political unrest.” — JSTOR Daily 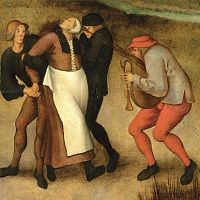