Roma depicts the relationship of a woman doing housekeeping and nanny work to the family for which she’s working. They like her a lot, but they treat her with an off-handed sense of ownership that may seem appalling to viewers. The film “has also prompted serious soul-searching about the plight of poorly paid and often-unprotected domestic workers in Mexico, where, nearly five decades after the period depicted in the film, inequality remains rife, racism stubbornly persists and social mobility seems to have stagnated.” – The Observer (UK) 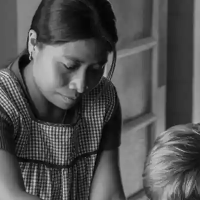