When the port city of Mukalla was finally liberated from Al-Qaeda, “[these] five Yemeni hip-hop dancers thought their problems had ended. … But last month Yemeni security forces briefly detained the five members of the WaxOn band, broke their equipment and only released the dancers after they had signed a document saying they would stop dancing hip-hop in public.” — Reuters 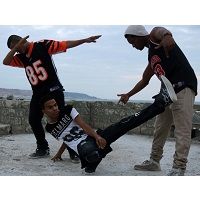