A former student of the legendary Soviet violinist David Oistrakh, Beilina was a highly-regarded musician in the USSR when she emigrated in 1976. “Despite the rave reviews Ms. Beilina received for her debut, her career in the United States did not soar. Like other Soviet musicians who emigrated, she had trouble adjusting to a system where the government was not overseeing every aspect of her career.” She did develop a devoted following as a teacher at the Mannes College of Music in New York City, where she also founded the Bachanalia Festival in 1988. — New York Times 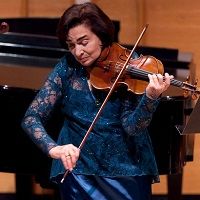