“The Mauritshuis museum in The Hague, which owns what is perhaps Vermeer’s best-known masterpiece, Girl With a Pearl Earring, has teamed up with Google Arts & Culture in Paris to build an augmented-reality app that creates a virtual museum featuring all of the artist’s works” — even The Concert, the Vermeer that was stolen in the 1990 robbery at the Isabella Stewart Gardner Museum in Boston. — New York Times 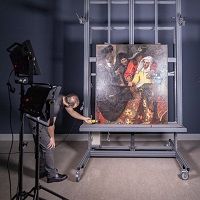