The Alexandra Palace, designed by the architects of the Royal Albert Hall, opened on a north London hilltop in 1873 — and burned down 16 days later. It was rebuilt in 1875 and was very popular but never made money; it “suffered more false dawns and setbacks in its 145-year history than almost any other playhouse in the country” and served a number of undignified uses over the decades. It’s now back in service as a performance venue for the first time in more than 80 years, refurbished and modernized to seat an audience of up to 1,000. — The Stage 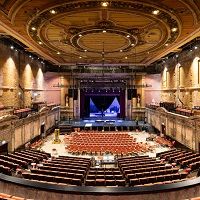