A decade ago, the Shenzen suburb of Dafen produced three-quarters of the world’s supply of oil reproductions of famous paintings such as Van Gogh’s Sunflowers. “[But] what was once pejoratively described as something akin to a citadel of copycats is now trying to rebrand itself as an incubator of original art,” albeit with limited success so far. — Hyperallergic 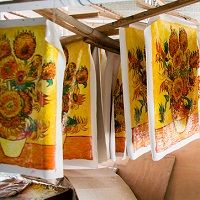