Ron English, who bought Slave Labour for $730,000, said he was going to whitewash it to protest the idea that street art can be bought and sold. That didn’t work so well: “‘My phone has not stopped ringing,’ he said, listing off the various offers and ideas that he has since fielded. Whitewash the mural at my gallery, one person said. Charge admission, someone else suggested. Do it on pay-per-view, advised a third.” 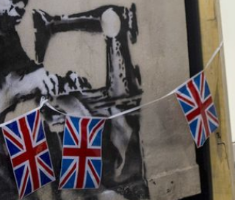