We ranked each institution based on its “centrality” a mathematical concept drawn from Network Science and one that is at the core of the Google search ranking algorithm. We discovered that, among a large number of fairly ineffectual institutions, one hub stood out as truly transformative. The most central in this hub were two museums, the Museum of Modern Art and the Guggenheim, followed closely by two commercial galleries, Gagosian, and Pace. – ARTnews 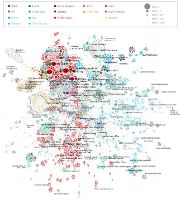