The mural of Ava Gardner on the wall of a public school campus in Koreatown recently drew objections from a Korean group that argued the sunburst in the background looks too much like the World War II-era Japanese imperial flag. After the LA Unified School District agreed to paint over the mural, Shepard Fairey warned that he’d cover his own mural on the same campus if the district went through with its plan. — Los Angeles Times 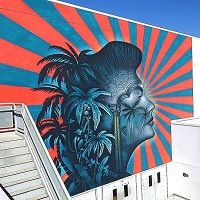