“The ruling by the Court of Cassation was handed down Monday after a long battle over the ancient Greek bronze, which was found by Italian fishermen off the Adriatic coast in 1964 and purchased by the Getty in the UK for almost $4m in 1977. The court was rejecting the Getty’s appeal of a ruling in June by a lower court in Pesaro stating that the statue must be returned.” — The Art Newspaper 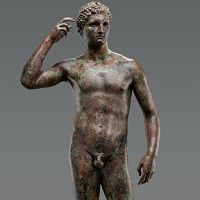