Which country is this? On a per capita basis, Laos, on which the U.S. dropped 2 million tons of explosives between 1964 and 1973 in an attempt to destroy North Vietnamese military supply lines. “A new generation of artists from the Lao People’s Democratic Republic are emerging, following decades of isolation in the orbit of the Soviet empire. The economy is growing rapidly, and the country is opening up.” — The Guardian 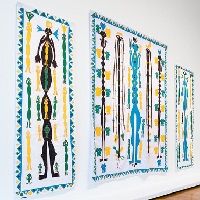