“My recurring nightmare was me, onstage, in this 1,100-seat theater, with no people in it. I’ve had it ever since we even talked about doing the show [The New One] on Broadway. Strangely enough, that became a reality in rehearsal, because it’s just the designers and the crew in the audience. There’s eight people in a room that seats 1,100, and so I do the show from start to finish with no laughter. It’s really empowering to live your nightmare.” — New York Times Magazine 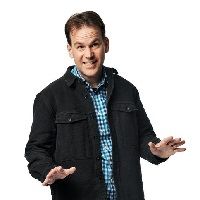