Back in 1973, the Times described the then-popular phenomenon as “restaurants that feature live theater.” Now it’s the other way around, writes Elisabeth Vincentelli: “The productions I caught this fall at least tried to make food an integral part of a show’s aesthetic and thematic universe. In turning New York venues into giant food courts, some even succeeded.” — The New York Times 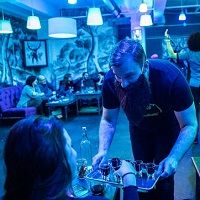