All eyes are now on France. Despite the legal hurdles, restitutions are possible but only through a drawn-out process. President Macron’s decision earlier this month to return 26 plundered items to Benin “without delay” will have to be approved by parliament. Similarly, when the Muséum de Rouen discovered a “toi moko”—a tattooed head of an ancient Maori warrior—in its collection in 2011, restitution to New Zealand had to be approved by a special act of parliament, which took four years. – The Art Newspaper 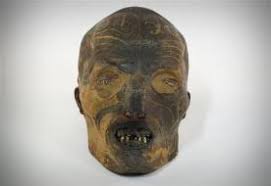