“The play’s lead actor, Mohamad Alrefai, showed up for his first interview at the United States Embassy in Beirut eager to introduce himself and to show his supporting documents for a visa, only to be told by an American consular official to keep his mouth shut, he recalled, and his stack of papers to himself. Several members of the group were asked to furnish their social media handles so American officials could read what they had posted. The director, Omar Abusaada, said he was asked if he belonged to a terrorist organization. “Would an actual terrorist say yes?” he later wondered aloud.” 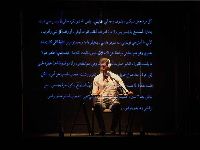